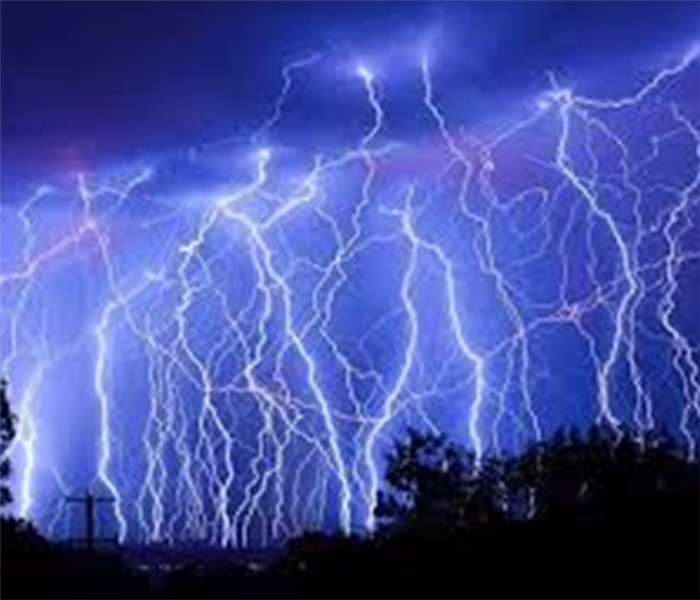 Lightning filling up the sky

A side flash (also called a side splash) occurs when lightning strikes a taller object near the victim and a portion of the current jumps from taller object to the victim. In essence, the person acts as a “short circuit” for some of energy in the lightning discharge. Side flashes generally occur when the victim is within a foot or two of the object that is struck. Most often, side flash victims have taken shelter under a tree to avoid rain or hail.

Lightning can travel long distances in wires or other metal surfaces. Metal does not attract lightning, but it provides a path for the lightning to follow. Most indoor lightning casualties and some outdoor casualties are due to conduction. Whether inside or outside, anyone in contact with anything connected to metal wires, plumbing, or metal surfaces that extend outside is at risk. This includes anything that plugs into an electrical outlet, water faucets and showers, corded phones, and windows and doors.

While not as common as the other types of lightning injuries, people caught in “streamers” are at risk of being killed or injured by lightning. Streamers develop as the downward-moving leader approaches the ground. Typically, only one of the streamers makes contact with the leader as it approaches the ground and provides the path for the bright return stroke; however, when the main channel discharges, so do all the other streamers in the area. If a person is part of one of these streamers, they could be killed or injured during the streamer discharge even though the lightning channel was not completed between the cloud and the upward streamer.

If you are a homeowner, property or facilities manager and you are affected by lightning please call SERVPRO of Cambridge/Belmont (617)864-7378 to assist you