Ice Dams - What You Should Know 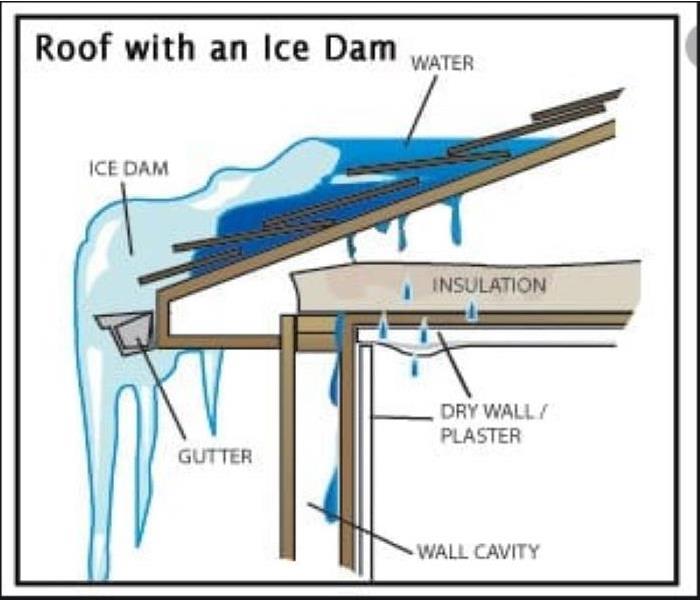 Ice dams form when melted snow refreezes at roof edges. Anyone who has lived in cold climates has seen ice dams. However, most of us don’t stop to understand why these ice bands form until they damage our homes.

Three things are required for an ice dam to form: snow, heat to melt the snow and cold to refreeze the melted snow into solid ice. Ice dams can form when as little as 1 or 2 inches of snow accumulates on a roof – if the roof is poorly insulated and air sealed, and the snowfall is followed by several days of sub-freezing temperatures. Ice dams develop as snow on the upper part of the roof melts. Water runs down the roof slope under the blanket of snow and refreezes into a band of ice at the roof’s edge creating a “dam”. Additional snow-melt pools against the dam and eventually leaks into the building through the roof or roof trim.

The reason ice-dams form along the roof’s lower edge, usually above the overhang, is straight-forward. The upper roof surface is at a temperature that is above freezing. And the lower part of the roof surface (along the eaves) is below freezing. The upper roof surface is located directly above the living space. Heat lost from the house warms this section of the roof, melting snow in this area. During periods of sub-freezing temperature the lower regions of the roof deck remain at sub-freezing ambient temperatures. Roof overhangs are not warmed by indoor heat-loss.

Deeper snow and cold temperatures increase the likelihood and size of ice dams. Every inch of snow that accumulates on the roof’s surface insulates the roof deck a little more, trapping more indoor heat beneath the roof deck and warming the roof sheathing. Each inch of snow has an R-value of approximately 0.5 – 1. The worst ice dams occur when deep snow accompanies cold weather.  Here is an example to provide a sense of scale: A poorly insulated and unvented R-20 cathedral roof with 10 inches of snow can result with serious ice damming.  In this example, 10 inches of snow adds ~between R-5 and R-10 to the roof system resulting in a total roof R of 25 – 30. The layer of snow holds indoor heat below the sheathing and could warm the roof sheathing above freezing in the area over the living space. If the inside temperature is 70 degrees and the outside 20 degrees (50 degree differential), the temperature of the roof sheathing would be between 5/25 and 10/30 of the way from 20 degrees toward 70 degrees. In other words, the roof should temperature should be between 30 and 37 degrees over the living space. Snow will probably melt under these conditions. Yet, the temperature of the roof over the unheated overhangs is 20 degrees, the same as the outdoor temperature. The melt water will freeze when it reaches that part of the roof. Deeper snow makes things worse. More insulation makes the situation better. You can do the math for a variety of snow depths and various indoor/outdoor temperature conditions to get a sense of how the variables are related. The trick is to keep the entire roof below freezing if possible. Roof venting helps and is discussed below.